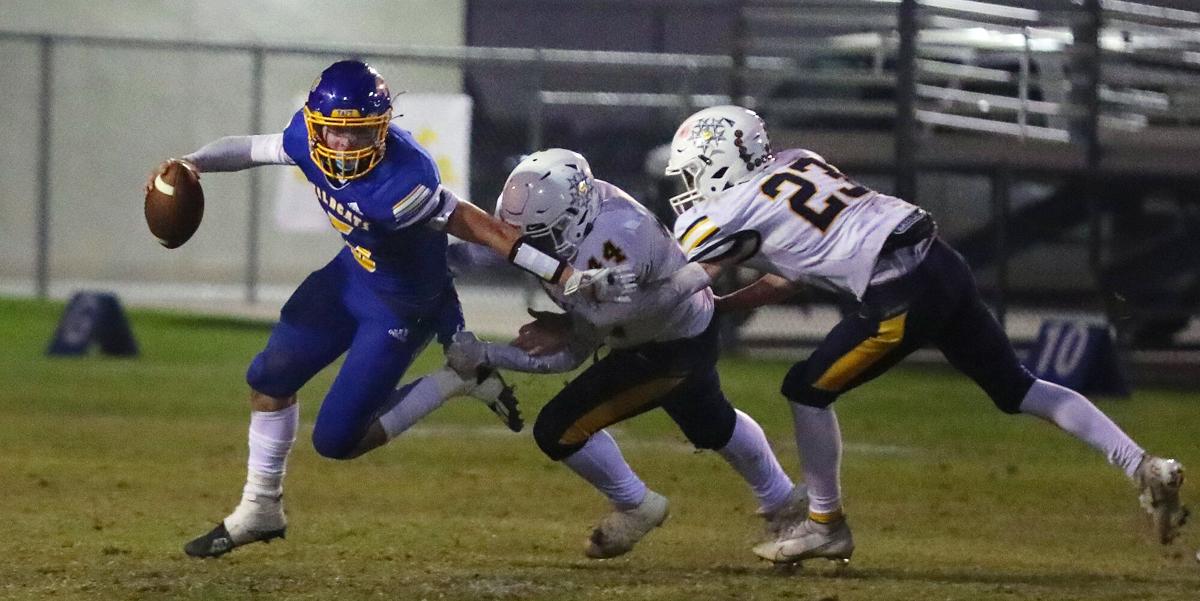 Taft quarterback Jackson Berry was able to escape a sack for a loss on this play and turn it int a big gainer. 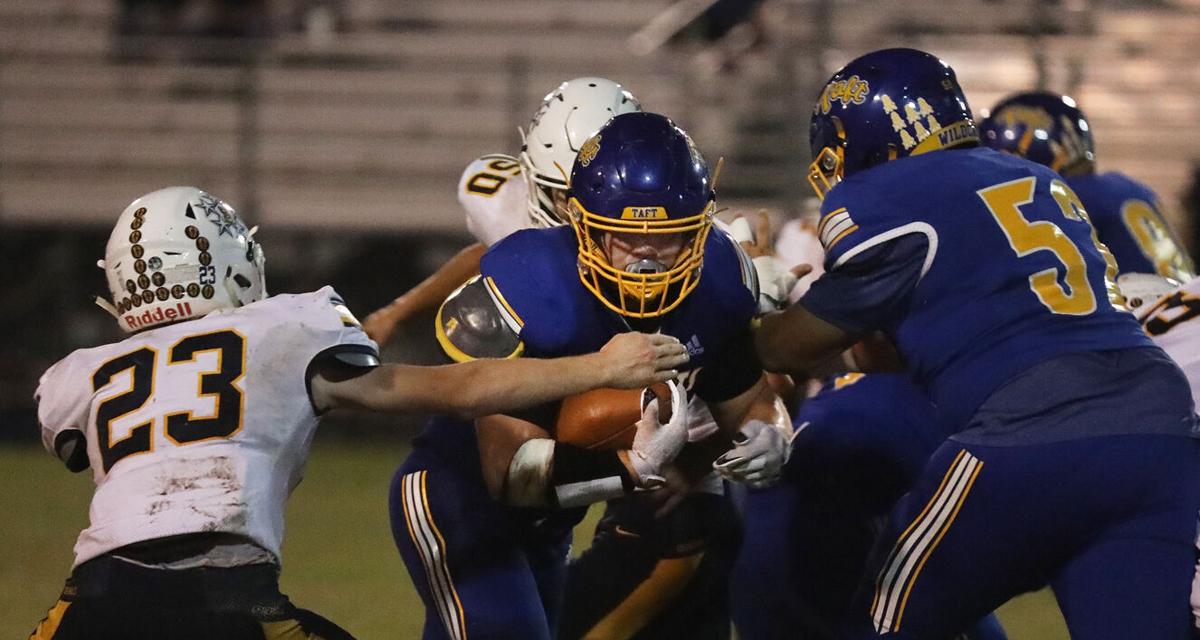 Wildcat Andrew Sherrell fights through heavy traffic on the line 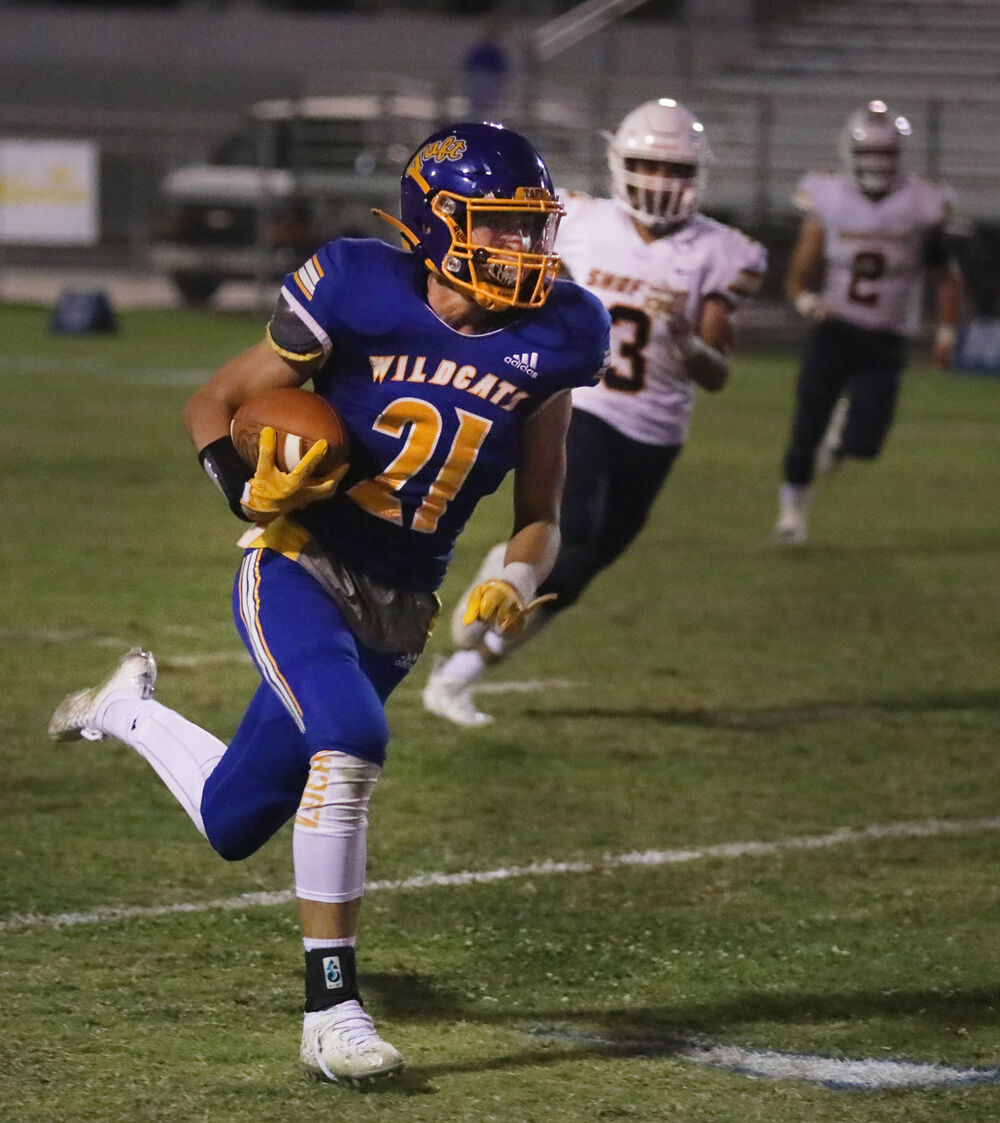 Bronson Ortlieb gets loose for a big gain. 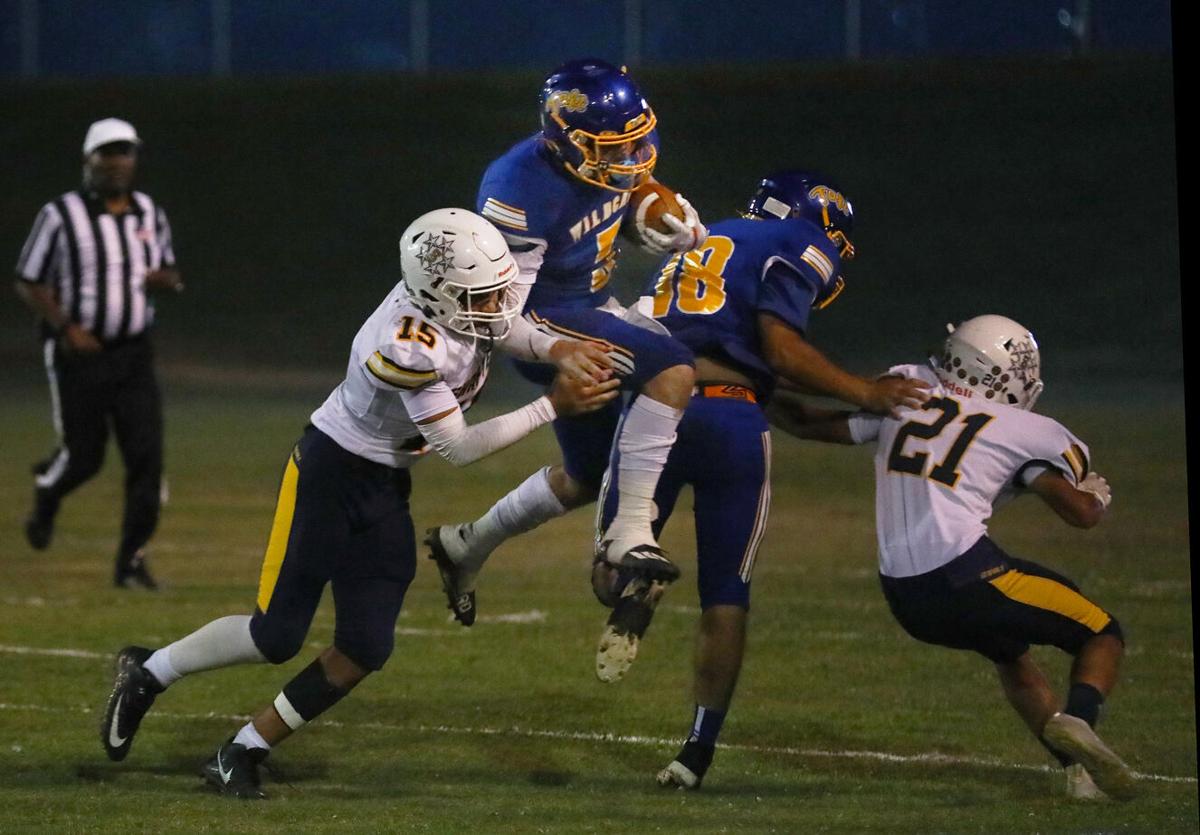 Jackson Berry tries to leap out of the grasp of one defender as Jesus Campos blocks another.

Taft quarterback Jackson Berry was able to escape a sack for a loss on this play and turn it int a big gainer.

Wildcat Andrew Sherrell fights through heavy traffic on the line

Bronson Ortlieb gets loose for a big gain.

Jackson Berry tries to leap out of the grasp of one defender as Jesus Campos blocks another.

Taft won the toss and deferred. Shafter got to kick and started on their own 22 but couldn't go anywhere.

A very short punt gave Taft first and ten at Shafter 30. First three plays went nowhere, and Taft went for it on fourth and 10.

QB Jayce Moore threw a swing pass to Jackson Berry, who took the pass, cut across the field through the Shafter defense and scored. But the holding penalty nullified the touchdown. The penalty hurt.

Coach Brian Durkan said it “killed momentum. It would have been nice to smack them in the mouth first.”

Taft tried again but could not convert on fourth and 17.

Richard Jennings return kick off 27 yards to the 44. Drive started with two procedure penalties backing Taft up 10 yards. Bronson Ortlieb carried for 18 yards to Shafter 48. Then Jackson Berry, in at quarterback, faked a handoff and kept the ball, running down the left side to the Shafter 5. He scored two plays later.

Shafter answered quickly on a run by Elijah Lucero.

Shafter made it 20-7 with 11.8 seconds left before halftime on a pass from Devon Sunderland to Anthony Velasco. Taft blocked PAT.

Berry opened up in the third quarter scoring a 60 yard touchdown Shafter with a one touchdown lead on the Cats. Shafter got the kick return to the 30 yard line on the start of their drive, the Generals then converted for a first down on Taft's 40. Taft's defense stopped Shafter's run on second down at the 40 where Shafter attempted a pass but defensive back Alberto Lopez was able to stop the pass attempt.

A punt pinned the Wildcats on their won one yard line

.Berry carried from the one but but was stripped and lost the ball on a fumble giving the ball back to the Generals the ball at the six where they quickly a short touchdown at 7:27 in the third quarter. After the kick to Taft they started the drive on the 39 yard line.

The Cats got flagged three times taking the drive nowhere forcing the cats to kick to Shafter. The Generals got the ball on their own 47 with 2:30, picked up a first and got a flag with 32 seconds on the clock ending the third quarter at the 45.

The Wildcats stopped Shafter’s drive in the beginning of the fourth. Third down on the 50 Berry scrambled getting the ball to the 41 with 1 to go, Berry handed off to Gaylord came up short, turning the ball over to the Generals at the 41. Generals completed a pass on second down for a first with a flag on Taft to stack on. Shafter scored at 5:50 for a 15 yard run taking the game out of the Cats hands with 34-13. Taft played the rest of the fourth for pride.

Durkan spoke to players after telling them the first thing that would need cleaning up is commitment in practice on and off the field, “We put that together God help McFarland.”

Durkan quipped and added on saying, “Proud of your effort. The execution is lacking but the effort is not.”